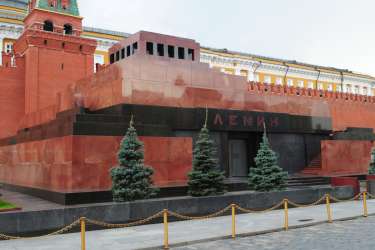 Lenin's Mausoleum, located in the very center of the capital, is the historical heritage of the communists. This architectural monument, which is under the protection of UNESCO. It is also an integral part of Red Square since the Soviet years.

Lenin's Mausoleum, located in close proximity to the Kremlin, was erected in record time in 1924. Its construction was completed on January 27th. This place served as the tomb of the leader of the proletariat - Vladimir Ilyich Lenin. The idea of ​​embalming the body of the leader was initially considered solely within the framework of time. Lenin's body was planned to be exhibited in the pillared hall until the moment of burial on the territory of Red Square. Initially, such a lengthy event was not considered, since all previous embalming attempts were completed poorly. A specialist in this field was found in Kharkov. It was after his work that the decision was made to embalm the body for long-term storage. He was started two months after the death of the leader. The most terrible experiences of Krupskaya, the wives of the leader, were justified very soon. She was against it and was afraid that the body of her spouse would turn into a symbol of idolatry.

The decision to build the mausoleum was made spontaneously. The leader's body was decided to be kept in a special tomb for some time, so that everyone could say goodbye to him. Lenin's body was transported from Gorki, where the leader of the proletariat spent his last years. The best medical luminaries immediately embalmed.
The leader's body was planned to be buried in a zinc coffin near the walls of the Kremlin, like other politicians. Considered options with the arrangement of the crypt and the usual funeral. But as a result, it was decided to organize a temporary mausoleum, first and then acting up to our days.
Lenin’s Mausoleum was originally built according to a project drawn up on the knee. The second project also suggested the construction of a wooden structure in Red Square, but already more massive. The last mausoleum operating today is built of stone.

Disputes around Lenin’s Mausoleum have not subsided since its construction. Supporters of the Communist Party believe that a landmark place should continue to function, but there is an opposite opinion. Many believe that the presence of the leader’s body in the mausoleum is nothing more than a mockery of the corpse and memory of the long-dead leader, and they demand that the body be brought to the ground.

The main distinguishing feature of the Lenin Mausoleum is its architecture. All three projects were brought to life thanks to A. V. Shchusev, a famous Soviet architect. The concept of the last project laid the ideas of simplicity and brevity, which Lenin so respected.

Every year, for about a month, Lenin’s Mausoleum closes for restoration work. However, they are conducted not only in the direction of updating the interior and facades. During this month, work is also underway on re-embalming the chief's body.

The modern mausoleum visually reminds the Egyptian pyramid. It consists of five ascending steps. In the central part of the building, the surname and initials of the leader are laid out in large letters. Marble, granite and other types of natural stone are used to finish the building.

The building is illuminated around, near its walls there is a post of honor guard. To the body of the leader can be approached for excursion purposes. It is stored in an armored glass tomb. Such measures were taken at the beginning of the XXI century, when several times mentally ill people took vandal drinks to break the glass with a hammer and shoot through him into the body of the leader.