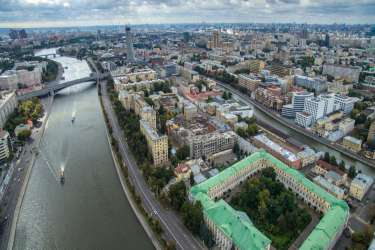 The time of the emergence of Zamoskvorechye, as a district for residence, dates from the beginning of the 1200s. It was then recorded the first mention of him in the annals. This area was a narrow strip near the walls of the Kremlin, on which Russian people and people from the Horde built their houses. At that time, the area located south of Moscow from the river was called Zarechye. The terrain consisted of swampy areas, floodplain meadows and woods.

During the reign of Prince Vasily Dmitrievich, royal and princely gardens were located on the territory of modern Zamoskvorechye. In the Middle Ages, handicraft settlements of blacksmiths, gardeners, Horde and tanners began to appear on this area. For some time the District was called Gardeners.

On the outskirts of Zamoskvorechye in the Middle Ages, people from Kazan organized Tatar settlement. Today, this place is located Tatarsky lane and Bolshaya Tatarskaya street.
In the time of Peter the Great, the territory of Zamoskvorechye was built up with noble estates and merchant houses. So the area turned into a merchant center of the capital. It was about him that Ostrovsky described so picturesquely in his works. By the way, the famous writer was also from Zamoskvorechye, he was born on Malaya Ordynka street.

After the war of 1812, Zamoskvorechye burned out and was almost completely destroyed. It took more than two decades to fully restore it.
In the XIX century the area was inhabited by the intelligentsia and nobility.

Famous temples are located on the territory of Zamoskvorechye, for example, the Church of St. Nicholas the Wonderworker at Kuznetsy, as well as merchant houses still preserved, such as the Tretyakov House and, of course, the world famous Tretyakov Gallery.

Speaking of Zamoskvorechye, it is impossible not to mention the famous confectionery factory “Red October”, founded in 1851 and still functioning.

Modern Zamoskvorechye is a large district of the central administrative district of the capital with a population of 58 thousand people. On its territory there are not only famous museums and architectural monuments, but also such significant buildings as the Headquarters of the Military District of Moscow.

The territory of Zamoskvorechye is located not only inside but also outside the Garden Ring. It includes such large streets as Serpukhovskaya, Bolshaya Ordynka, Novokuznetskaya, Dubininskaya and others.