Tourist center of the capital Arbat 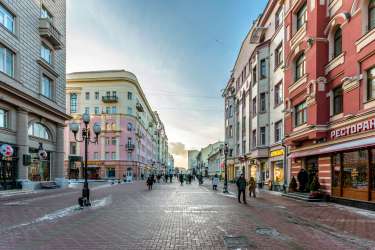 Tourists from Russia and abroad consider Arbat to be the second most popular place after the Kremlin. One of the main streets of the capital is a large highway, but a very popular and beloved one is for a completely different reason. On the Arbat, the spirit of old intelligent and noble Moscow and the unique charm of street artists and musicians are intertwined in an interesting way.

Arbat is not an ordinary street, but a real historical district of Moscow. In the annals the first mention of it is dated 1493 year. At that time, one of the worst fires occurred in the capital, which resulted in the destruction of many buildings that were part of the history of the capital.

Around the name of the Arbat is still not subside controversy. According to one version, it came from a damp ravine area where the street was originally located; according to another, Arbat got its name from the Arabic word “Rabat”, which means a fortress, because it was located in close proximity to the Kremlin.

In the 17th century, craft settlements were located on the territory of the modern Arbat. About what the masters and apprentices were doing, you can find out by the name of the lanes and streets located in this area - Povarskaya, Starokonyushenny, Skatertny, Krechetnikovskiy, Stolovy, Khlebny.

In the 17th century, mostly wooden buildings were located on the territory of the modern Arbat. Unlike Tverskaya Street, inhabited by boyars, less rich, but noble families lived in this area.
The stone buildings that have survived to this day appeared on Arbat after the fire of 1812, because of which most of the wooden buildings were destroyed. At that time, the district turns into a cozy place with measured family life. Trading rows and craft sites were still located on the territory of Arbat, but occupied a smaller area near Arbat and Smolensk squares.

The nineteenth century is notable for the area with an abundance of famous residents, such as Kropotkin, Gogol, Pushkin, Rostopchin. Writers and philosophers, officials and well-known lawyers, doctors and professors coexisted on the territory of the modern Arbat.

In the middle of this century, the architecture of the Arbat began to change, taking a modern look.

On the territory of the modern Arbat, ancient buildings with great historical value side by side with modern buildings. Such a neighborhood can not always be called successful. A good example is the Alfa Arbat Center shopping and office complex, located between Arbat, the Arbat Gate Square and Bolshoi and Maly Afanasyevsky lanes. The huge eight-storey complex does not fit into the overall architectural picture of the area.

The territory of the modern Arbat begins from the Arbat Gate to Smolensk Square. The length of the main street of the area is 1.2 kilometers. From the middle of the last century, representatives of the informal street culture, expensive shops and business centers successfully coexist in the district.